Is it possible for me to learn a piano Latin jazz number, based on a Oscar Peterson version, and two songs in time for the debut performance of a new tap company? How about trying my hand at compering for a circus cabaret? Now seems like a good time to take on my first ever feature film job, working under the guidance of the stunt team. And while I’m at it, why not throw in a couple of solo guest featured tap dance gigs for good measure? Let’s not forget about learning and playing the keyboard in a band for a music gig at the iconic Royal Fesitval Hall in London. All this within just 5 weeks? Go, go go!

Old Kent Road
A few years ago I took up jazz piano to help support my tap dance musicianship development. Although I’ve played the odd jazz tune for hoofers at the London Tap Jam (encouraged and supported by one of my past music tutors) I wondered what it would be like to play for choreographed numbers. Well in January I was presented with that very opportunity although it came with a mammoth task of learning set arrangements in a short space of time for a debut performance of Avalon Rathgeb’s bright, young and new tap company Old Kent Road. Nonetheless, it was a challenge I was willing to take on and after 4 weeks of preparation I made my piano solo debut for tap dance with the company’s debut performance at The Place Resolution. An exciting start to the year.

Greentop Circus Cabaret: Mad Science
The easy-going month of spread out gigs included a highlight to The Tipton Project’s growth. Natalie and I had long since discussed hosting our own show and when the Greentop Circus Cabaret were looking for new comperes we saw this as a perfect opportunity to test our co-compering skills. A bit of planning, lots of nerves and our joint effort paid off well with our debut as comperes for the February cabaret. I’d not done any compering before… Phew!

The film
Sometime in January 2015, an innocuous post about a casting appeared on a Facebook circus group. There was limited information with only a yahoo email address to apply to. Nonetheless I decided to investigate further even though I assumed it was probably for a low-budget short film. I was promptly contacted by an agency and soon found myself talking about an audition at Warner Studios in Leavesden. No low-budget short film here! Still, I wasn’t quite sure of what the job would entail beyond the brief movement synopsis. It was only the day before the audition that I found out it was the new Warner Bros. film Mowgli: Legend of the Jungle. A fun, challenging and successful audition began the journey of an unexpected but amazing experience that provided me with a 3 week glimpse into the high-paced, creative and technical world of feature film production. I quite like this film business. 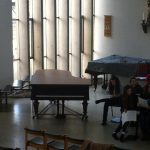 Two Duke Ellington Sacred Concerts
Well I wasn’t expecting to be balancing a full time schedule of filming with tap dance bookings. The tap gigs had been confirmed weeks before knowing about the film and since they were all outside of London I had been planning to keep at least the day following each gig clear for rest. But that all changed when I signed up to be “special extra” at Warner Studios.

Keyboard player in Mirth Control for the 2015 WOW Festival at the Royal Festival Hall, Southbank Centre

Having performed in a tap dance concert at the Queen Elizabeth Hall (QEH) back in 2005 and again at the Purcell Room in 2007, I added violin last year to both the Southbank venues of the QEH and Royal Festival Hall (RFH). With the musical play, Edmund the Learned Pig, I was able to add both acting and aerial silks to the QEH. This year was the turn of piano and I was proud to be able to add it to the most prestigious of the Southbank venues, RFH.

I’m not entirely sure how I survived a month crammed with all these activities but they were amazing opportunities to be part of. What an overwhelming fun, hard-working, exciting month!