Aeriella in Edmund The Learned Pig

I play the role of Aeriella, an aerialist with vertigo, in this “gloriously dark, humane, weird little show” (ThreeWeeks) which is “a short and curly tale of itinerant Circus folk and a Pig who taught himself to read” (Fittings Multimedia Arts). I utilise acting, dance, aerial silks and percussion for this dark, funny and twisted children’s play.

Bonaparte’s travelling circus and marvellous menagerie has hit the skids. A zoo with just pigeons, an aerialist with vertigo and a Mr Memory who can’t remember his name. No one was coming. And then into their lives came a Pig…

Edmund the Learned Pig goes on a national tour in 2015 starting at the Edinburgh Fringe Festival 2015 as part of the British Council Edinburgh Showcase 2015. 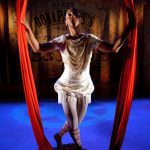 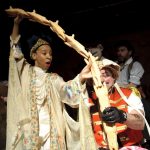 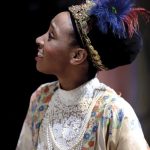 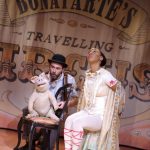 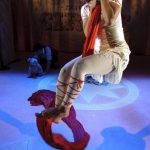 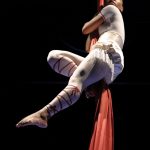 Also on Saturday, and into Sunday, there are lots of good things at Hull’s Freedom festival, including… Edmund the Learned Pig by Fittings

A stylish, warm-hearted show for all the family, told with real bravado.

Bonaparte’s circus is failing. The aerialist is afraid of heights and the mind-reader is losing his memory. Failing, that is, until the arrival of Edmund, a puppet pig who can talk, sing, read and dance. The design is all dusty, faded glamour which, combined with aerial silk work and music by the Tiger Lillies’ Martyn Jacques, really puts the spectacular into this super, sometimes very silly, show. References to Orwell’s ‘Animal Farm’ are dropped in amongst the bacon jokes, as Edmund is seen as either saviour or dinner. The play also beautifully integrates British Sign Language, the bilingual actors translating when other characters are talking. ‘Edmund the Learned Pig’ is a gloriously dark, humane, weird little show.

The performers play energetic, fleshed out and quirky characters, which make the show fascinating to watch and hold attention right to the end… Ariella the circus performer who has lost her nerve played by Annette Walker is poignant and ethereal, wearing a beautiful white satin old time circus costume with colourful embroidery, glittering sequins and silk. She keeps one secret to the very end.

But the real ace up the production’s sleeve is the presence of aerialist Annette Walker, who finally conquers her vertigo to produce a breathtaking silk routine

Resources by the Royal Exchange Manchester