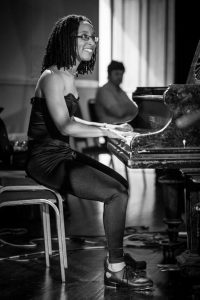 Annette is a multi-skilled performer who studied ABRSM Western classical piano to Grade 8 and violin to Grade 6. In 2003 she began studying blues and jazz piano to help support her tap dance career and has since developed as a composer, arranger and music director as well as a performer.

Annette completed a Diploma in Jazz and Popular Music Studies at Goldsmiths, University of London in July 2012 for which her instruments were piano, tap dance, drums and singing. In 2013 she was band leader and pianist in the house band for Jazz Alive’s Open Jam Sessions.

From 2009 until 2017 Annette was one half of the sassy, swinging, cabaret duo, The Tipton Project, where she utilised her skills as pianist, tap dancer, physical comedy and co-compere with fellow performer, Natalie Verhaegen. The Tipton Project was a live music act that fuses comedy, dance and circus.

Annette’s musical interests have spanned a wide range of genres including Western European classical, English folk songs, Jamaican folk songs, American and English musical theatre, American blues and jazz, Western pop and rock, and British reggae. She is a versatile musician who has her own distinct style and sound.