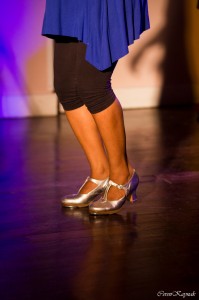 [T]ap dancer Annette Walker stamped down the aisles and hoofed it onto the stage with terrific pizzazz. (The Telegraph, 4 March 2013)

Annette Walker is a tap dancer based in the UK and often collaborates with musicians, especially those with jazz influence, as well as with other dancers and performing artists. An avid performer of improvisation, she has been queen of the Renegade Stage – a workshop introducing tap dancers to improvising at the jam – at the regular London Tap Jam since it started in 2006.

Annette has performed in numerous cabarets, festivals and special concerts such as Turned on Tap which was at the Queen Elizabeth Hall, Southbank Centre (London UK). Her first television appearance was dancing with tap group AboutTime in the Channel 5’s Paul O’Grady Show. On occasion she is one of the featured guest tap dancers in the 1930s-style show Swinging at the Cotton Club and has been touring UK theatres with them since 2016.

In 2019 Annette featured as the tap soloist in BBC Prom 54: Ellington’s Sacred Music at the Royal Albert Hall in London, UK. In March 2020 she was in a short BBC clip in CBeebies YolanDa’s Band Jam #39 (series 2, episode 19) leading a mini-workshop on tap dance improvisation for 4-7 year olds with live music.

In theatre Annette played a tap dancer to represent the character “Master Juba” in the Fittings Multimedia Arts production of Master Juba, The Wonder of the World. In another theatre production, Edmund the Learned Pig, Annette played the role of “Aeriella” which included acting, tap dancing, aerial silks, drumming, singing and basic sign language.

In its oral traditional Annette has learned from new and old generations of tap dancers and in the UK this has included the late USA bebop, jazz hoofer Will Gaines (1928-2014) and Dutch “American Rhythm Tap Dancer” Tobias Tak (1954-2020) from whom she learnt traditional routines such as Shim Sham Shimmy, BS Chorus and Coles Stroll. She is passionate about sharing the history and its jazz roots as well as developing exciting new work and discovering creative collaborations.

Annette presents her independent research on tap dance at conferences and takes part on panel discussions. As of 2019, she is one of the steering committee members of the Tap Dance Research Network UK (TDRN UK) who bring together researchers, artists, academics and practitioners.

Excerpts of Annette’s special guest solo performances from the BBC Proms 2019 – Prom 54: Ellington’s Sacred Music and the Swinging at the Cotton Club tour (2017-2018)